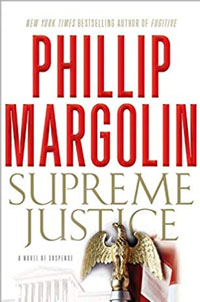 The New York Times bestselling author returns to the power corridors of Washington, D.C., in this exciting follow-up to the bestselling Executive Privilege.

Filled with the fast-paced twists and surprises that propelled Executive Privilege, Supreme Justice reunites attorney Brad Miller, FBI agent Keith Evans, and private investigator Dana Cutler to untangle a five-year-old case involving a ghost ship and the President’s nominee to the U.S. Supreme Court. Sarah Woodruff is on death row in Oregon for murdering her lover, John Finley. Woodruff was tried for Finley’s murder once before but the case was dismissed when the judge received irrefutable proof that Finley was still alive.

Meanwhile in Washington, D.C., trouble is brewing in the hallowed halls of the Supreme Court. Justice Ronald Chalmers resigns, creating a vacancy, and Dennis Masterson, former head of the CIA, is determined to see his personal choice sit on the bench. When another Justice is attacked for no apparent reason, Dana is quietly called to investigate. Brad Miller, Keith Evans, and Dana Cutler are looking for links between the ominous happenings in the Justice Chambers, the Woodruff appeal, and a shoot out years ago and on a small freighter docked upriver in Shelby.

Phillip Margolin has written 14 New York Times bestsellers, including his latest novels, Fugitive and Executive Privilege. Each displays a unique, compelling insider’s view of criminal behavior, which comes from the author’s long background as a criminal defense attorney who has handled 30 murder cases. Winner of the Distinguished Northwest Writer Award, Margolin lives in Portland, OR.