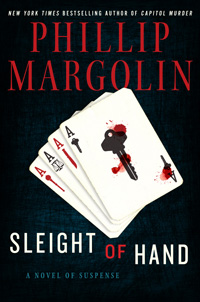 New York Times bestselling author Phillip Margolin has written another winner with his newest standalone legal thriller SLEIGHT OF HAND – releasing April 9. Margolin brings back fan favorite P.I. Dana Cutler from his Washington Trilogy series (Executive Privilege, Supreme Justice and Capitol Murder) to take
down a charismatic lawyer who frames a millionaire client for his own cold-blooded crimes. Charles Benedict—criminal defense lawyer, amateur magician, and professional hit man—and Private Investigator Dana Cutler are on a collision course set in motion by Benedict’s greatest sleight of hand trick yet: framing a millionaire for the murder of his much younger wife.

Ten years ago, Horace Blair fell in love with Carrie, the prosecutor in his DUI trial. After a torrid courtship, he persuaded her to marry him and to sign a pre-nuptial agreement guaranteeing her twenty million dollars if she remained faithful during the first ten years of their marriage. The week before their tenth
anniversary, Carrie disappears and Horace is charged with her murder. Desperate to clear his name, the millionaire hires one of D.C.’s most brilliant and ruthless defense attorneys, Charles Benedict, who, in a twist of fate, may be the very man who killed Carrie.

Meanwhile, private investigator Dana Cutler is in the Pacific Northwest on the trail of a stolen relic, a medieval scepter dating from the Ottoman Empire. Hitting a dead end sends her back to Virginia perplexed and disappointed—yet, the jewel-encrusted specter may be the key to the twisting case of Horace and Carrie Blair.

Dana Cutler, the tough and gutsy private investigator from his popular Washington Trilogy (Executive Privilege, Supreme Justice and Capitol Murder), is compelling and sharp and a pleasure to read. Charles Benedict is one of the more interesting villains Margolin has created. He’s a slick, vital attorney with money to burn, but a psychopathic killer with a taste for blood. He’s the perfect catalyst for suspense and drama.